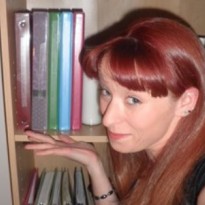 Here's the thing about The Folly of the World: the story was underwhelming, yet the book only made me love Jesse Bullington's writing even more.

After reading (and loving) his previous work, this one wasn't quite on par. Still good, still worth a read, and by an author without the impressive catalog Bullington has, I would've been more hooked. So definitely go and read this, mortals, and enjoy it. And then if you haven't already, go read The Sad Tale of the Brothers Grossbart, because that novel kicks some serious ass.

Because here's the other thing: when Bullington writes, he kicks ass, takes names, and clearly enjoys it.

And there's something awesome about a writer whose writing exudes the fact that he's having fun, having a damn good time putting those words on paper and playing God and writing a story he'd want to read. If the writer is having fun then so are you, and Bullington's work is an excellent example of how its easy to get caught up in the author's enthusiasm.

Is his style to everyone's taste? Hell no. He gets dirty, sometimes to the point of seeming to be dirty for the sake of being shockingly so. He's sarcastic and harsh. There's grit, sex, bodily functions of the type your sweet grandma won't even acknowledge exists, and much, much profanity. Oh my, the profanity! Now I'm someone who curses with such skill it puts sailors to shame, so I'm in no way offended by the language in Bullington's novels; I will even admit to being somewhat pleased by it. However, I do realize that's not everyone's cup of tea, especially in such liberal doses, and we're not talking about a few uses of damn, hell, bitch, and shit. Fuck is common, and if one takes issue with "the C word" (as many justifiably do, I'll admit), then one should probably just walk away and save themselves the 500+ pages of being offended. To each their own.

But Bullington wrote what he wanted to write and, just as importantly, how he wanted to write it. And the joy of doing that infuses every paragraph; it's infectious. While I was reading, I had the distinct impression of a man who still loves writing and hasn't forgotten why writers often start writing in the first place: because it's fucking fun. He seems to write for himself; we just have the pleasure of enjoying it, too.

So yeah. That's that. I guess this was less a review of The Folly of the World and more a review of Jesse Bullington, Writer, but whatever. You read it anyway, didn't you?
Tweet
759 BOOKS